Gil Shwed, Founder and CEO If you ask any Check Point Software Technologies, Ltd. (NASDAQ: CHKP) researcher or engineer for one word that describes what Check Point does best, you’ll get a wide range of answers—anything from “cybersecurity” to “cyber-security” to the rebels that’ll say “cyber security”. But over the years, the company has been known for only one thing, “Growth.”

“We sell in 88 countries and have 70 offices around the world—with—1,700 to 2,000 people in our global offices to be a successful global company, you have to develop a set of global values and behave as one global organization. You need to hire local people in every country where you operate. And you have to find the right balance between functioning as ‘one global organization’ and respect for local values and ways of operating,” says Gil Shwed, the founder and CEO of Check Point Software Technologies, Ltd. And the history says it all. In 1993, he worked with some 8200 unit colleagues in the Tel Aviv area apartment of the grandmother of Shlomo Kramer—who has gone on to invest in a string of Israeli winners—to develop a world-class Firewall to protect computer networks from hackers. By 1995, his investors wanted Shwed to take the company public—which he finally did in 1996.

Since then the company has grown substantially. 2016 revenues and profits were $1.7 billion and $725 million, respectively and its market capitalization as of December 18 was $17.8 billion—up at a 22.1 percent annual rate since its July 1996 IPO. Check Point’s growth has been based largely on expanding geographically. “When we started in 1993 we were three guys in Israel it was clear that to be successful we would have to win in the U.S. market. For the first two years, we were traveling all the time. Our first virtual address was in Boston and our first sales and marketing function was in Silicon Valley -- where we used a great headhunter to hire a leader for that activity,” says Shwed.

Shwed’s goal was to build a global structure for Check Point which differed from the two predominant models he saw at the time. As he explains, “At the time, there were two predominant models for globalization: hire employees around the world who were ruled by Israeli executive or hire a U.S. CEO who would run the global company—this tended to fail. We decided to hire the best in class people to run the countries where we operated.”

At its core, Check Point delivers Web Security solutions which minimizes vulnerability and educate users about unsafe practices. The company has been a leading security provider for twenty years, protecting customers from an ever changing threat environment. The Check Point approach to the Secure Web Gateway leverages its security expertise and industry’s most complete portfolio of security innovations to deliver the protection required to defend against web-borne malware, the number one threat to organizations.

We sell in 88 countries and have 70 offices around the world—with— 1,700 to 2,000 people in our global offices to be a successful global company

Preventing the Spread of Malware

Web access is now ubiquitous in the workplace, making it the predominant route for attacks on enterprises. Attackers are targeting enterprise users by driving them to malware infested websites. Recent Check Point research found that in 74 percent of organizations, hosts are accessing a malicious website once every 1.5 hours. And this risk becomes even greater when employees use high risk applications. In the same Check Point research, 91 percent of organizations’ users were found to be accessing applications with a potential security risk. As the sophistication level of attackers continue to rise, the role of the secure web gateway has become critical to protect against web-borne malware. An effective secure web gateway must provide multi-layer security to protect against the most sophisticated forms of malware and prevent attacks.

Check Point’s Secure Web Gateway is an all-in-one solution that enables secure use of Web 2.0 with real time multi-layered protection against web-borne malware, largest application coverage and granular application control, centralized intuitive management, and end-user education. It is built with the most powerful combination of Websecurity features, which includes antivirus to identify and block sophisticated malware, threat Cloud’s global security intelligence to identify malware, URL Filtering to control access to millions of malware and phishing websites, and many more.

Check Point’s Secure Web Gateway solution has flexible deployment options including stand-alone dedicated appliances that comes in a variety of models to fit branch and small offices, medium, large and extra-large enterprises, and secure web software packages that are available on any security gateway.

Through Check Point’s Secure Web Gateway solution, companies can stop incoming malicious files at the gateway before the user is affected with real-time virus signatures and anomaly-based protections from ThreatCloud, the first collaborative network to fight cybercrime. They can identify over 9 million signatures and 900,000 malicious websites with a constantly-updated worldwide network of sensors that provide ongoing malware intelligence. Further, the clients can control access to millions of web sites by category, users, groups and machines with cloud-based technology that is constantly updated with new websites to support employee productivity and security policy. The solution also allows them to unlock access to entire websites or just pages within, and set enforcements by time allocation or bandwidth limitations and maintain a list of accepted and unaccepted website URLs to fine tune security policies.

What really differentiates Check Point is their quest to deliver result-oriented excellence. At its helm, Shwed accepts nothing less than excellence. When Shwed achieves said excellence, he asks what’s next. This is perhaps one of the many reasons behind the success of Check Point. It is also his mantra for employing staff. He mentions, “Culturally, Check Point is a very challenging environment. Our key value is excellence, and that’s the most challenging value, because we come to work every day and ask ‘what can we do better?’.”

So what is next? “Firstly, creating a unified security environment. Secondly, providing more and more security to customers, and adding to our software blade architecture”, he says without hesitation. This is a man who knows exactly what he wants. Shwed is a man whose regrets are eclipsed by his rationality that he did the best he could with the knowledge he had at the time. Looking at how successful Check Point is, one can say he did very well indeed. “Every day I think about things that I could have done better, behaved better towards people, hired different people, things like that. But, I don’t have any major regret – overall, I think things went well. I judge myself based on whether − with the information that I had at the time − I could have done things differently,” explains Shwed.
Although the early days of Check Point were challenging and exhausting, Shwed remembers the time fondly. “We were more thoughtful and strategic thinkers back then than we are today. We really believed that every step we made would make a difference. We didn’t have room for mistakes, so everything we did we thought through very thoroughly.” In retrospect, he concludes, “Strategically, we did the right things, so I’m not regretting that.”

Shwed’s co-founders, Shlomo Kramer and Marius Nacht, both left Check Point for “personal reasons, to start taking care of their kids and families”. Kramer left in 2003, and realized within a few years that what “he was really interested in was running and starting a software business”, so he founded Imperva, another infosec company. Nacht left Check Point in 2008 to pursue the full-time job of taking care of his four children and family.

Unlike his co-founders, Shwed “can’t imagine” a life without Check Point. “It could happen, I’ve never said I’m definitely going to be here forever”, he continues, although having spent an hour with him, I struggle to imagine it. “As long as I’m challenging myself, finding it interesting, and am contributing to the company”, he is happy where he is. “It is my lifetime project”, he admits, “and I find it very hard for me to imagine myself without Check Point”.
- Russell Thomas
October 03, 2019 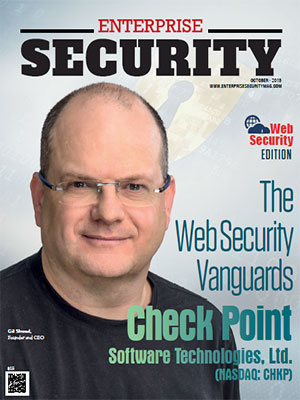